A Solution to Speeding on 17th? 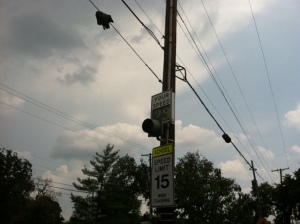 An electronic speed display sign on Mt. Olivet Road NE. I'd like to see one of these on 17th Street SE.

Last week, the Metropolitan Police Department announced the deployment of 19 new speed cameras at locations across the city. I was pleased to see that two of the new cameras will be deployed in Hill East – one on the 1900 block of Independence Avenue SE and the other on the 200 block of 19th Street SE. Independence Ave. and 19th Street see heavy commuter traffic and speeding. Hopefully, the new cameras will slow vehicles down.

Notably absent from the list is 17th Street SE (a.k.a. “the speedway”), the other heavily trafficked commuter corridor in our neighbor. Cars frequently speed down 17th Street between East Capitol St.  and Barney Circle with only two stoplights (Mass Ave. and Potomac Ave.) to slow them down. Making matters worse, drivers crossing Mass Ave. can see the Potomac Ave. stoplight and tend to speed up to avoid the red light. Drivers also frequently turn on to E St. SE and D St. SE when the light at Potomac is red, turning narrow side streets into dangerous commuter thoroughfares.

When I’ve asked MPD to help with the speeding problem, they’ve been responsive. Earlier this year, MPD placed their roving electronic speed display at the corner of 17th St. SE and C St. SE. The display made a difference – vehicles noticeably reduced their speed as they approached the sign. But the problem returned once the sign was removed. MPD has also periodically set up speed traps and placed rumble strips along the route.

I’ve also asked the District Department of Transportation (DDOT) to place a permanent electronic speed display sign between Mass Ave. SE and Potomac Ave. SE. While the sign would not issue citations, it would help slow traffic down. DDOT has said they will consider the request after they gather data. Note that since 17th St.  is an evacuation route, DDOT can not install other traffic calming measures like speed humps.

Bottom line – something needs to be done before someone is seriously injured or killed. I’ve formally asked MPD to once again consider deploying a speed camera on 17th Street. I’ll also continue working with DDOT on appropriate traffic calming measures for the corridor. I’m hopeful that we will see some progress on this issue in the coming months.

This entry was posted on Friday, September 9th, 2011 at 2:45 pm and is filed under Uncategorized. You can follow any responses to this entry through the RSS 2.0 feed. You can leave a response, or trackback from your own site.

3 Responses to A Solution to Speeding on 17th?