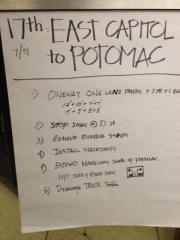 Recommendations from the 17th Street SE table at the July 31 charrette meeting.

Not a whole lot of new information to add from the Meeting #1 recap. Once again, I participated in the 17th Street SE group along with two other residents and a McKissack & McKissack consultant. Our table agreed with the Monday group’s recommendation to maintain 17th Street SE as a one way street but reduce it to one lane with a bike lane and on-street parking on both sides of the street.  We also suggested installing bulbouts or neckdowns at each intersection between East Capitol Street SE and Barney Circle SE, which would narrow the road and shorten the pedestrian crossings.

A few other suggestions from our group:

DDOT and McKissack and McKissack plan to release their final recommendations/plans for 17th & 19th Streets during a mid-September meeting.  I’ll post the meeting date/time/location once it is announced.

This entry was posted on Wednesday, August 1st, 2012 at 2:09 pm and is filed under Uncategorized. You can follow any responses to this entry through the RSS 2.0 feed. You can leave a response, or trackback from your own site.