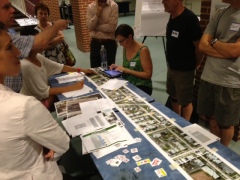 Last night, about 30-40 residents joined representatives from the District Department of Transportation (DDOT) and the consulting firm McKissack & McKissack for the first of two public charrette meetings on the 17th & 19th Streets Safety Improvement Project. Organizers divided attendees into six groups, each assigned to a different portion of the 17th and 19th Street corridors:

Each group gathered around a map of their portion of the corridor and used cut-outs and markers to suggest improvements. For example, you could place a cut-out of a stop sign on an intersection in need of a signal.

Here were the group’s recommendations:

A big thanks to everyone who was able to attend the meeting. And a special thanks to Hill East residents Denise and Liz for taking notes and facilitating the conversation.

Please share any comments and feedback below. If you missed Monday’s meeting, I hope to see you tonight (July 31), 6 pm – 8 pm at Pilgrim AME Church, 612 17th Street NE!

This entry was posted on Tuesday, July 31st, 2012 at 8:01 am and is filed under 17th Street SE, 19th Street SE, Transportation. You can follow any responses to this entry through the RSS 2.0 feed. You can leave a response, or trackback from your own site.