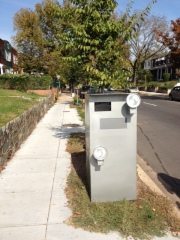 The new portable speed camera will be identical to this model used by MPD crews this afternoon to mark the camera’s future location.

After a long wait, a speed camera is finally coming to the “17th Street Speedway!”

This afternoon, I met with Lisa Sutter from MPD’s Traffic Safety Automated Enforcement Unit and her crew as they marked the future location of a portable speed camera on 17th Street SE. The camera will be located on the west side of the 300 block of 17th Street SE and will measure speed as vehicles approach the intersection of 17th and D Streets SE.

For years, Hill East residents have complained about vehicles speeding down 17th Street SE. Last November, ANC 6B sent MPD a request to install a speed camera along the corridor, but installation was delayed as MPD worked out the details of contract to secure new photo enforcement technology and waited for DC Council approval. Earlier this month, the DC Council approved the contract.

A few more details about the speed camera:

The announcement of a speed camera comes on the heels of DDOT’s announcement that they plan to narrow the corridor to one lane, introduce a dedicated bike lane and install curb extensions at intersections along 17th  between East Capitol Street SE and Potomac Avenue SE. Since DDOT’s recommendations will not be implemented until 2014, the speed camera should help slow traffic  down on 17th Street SE over the next two years.

Thanks to MPD for their decision to place a camera on this dangerous street, my ANC 6B colleagues for unanimously supporting the request and, most importantly, the many residents along 17th who have fought for years to improve safety along the corridor.

This entry was posted on Wednesday, October 17th, 2012 at 10:10 pm and is filed under 17th Street SE, Transportation. You can follow any responses to this entry through the RSS 2.0 feed. You can leave a response, or trackback from your own site.