Below are renderings that Donatelli/Blue Skye shared at last night’s DMPED community meeting on Reservation 13. Here are some basic details about the plans: 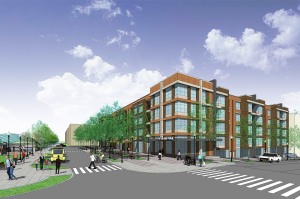 Rendering of North Building, which would be located directly East of the Stadium-Armory Metro Plaza. 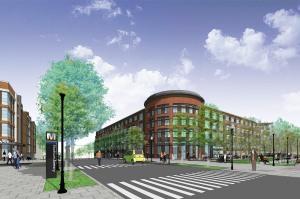 Updated 4/26/13: A few more details on the plan above and my initial thoughts.

Overall, this is a good plan. There are some areas in need of further work (more retail along side streets, street in front of North Building, etc.) but the Donatelli/Blue Skye plan is certainly consistent with the mixed-use retail/residential development called for in the Reservation 13 master plan. And the Donatelli/Blue Skye team certainly expressed a desire and willingness to make changes and engage the surrounding community in the process. I think it is worth our time and effort to see this come to fruition.

Speaking of process, I plan on inviting Donatelli/Blue Skye back out to the neighborhood to share their plans once again and to get further community comments and feedback. The goal is for ANC 6B to send some comments to the Deputy Mayor’s Office before DMPED decides whether to proceed with the Donatelli/Blue Skye plan. I’ll share date/time/location information once a meeting is set.

One final thought: It was great to see Ward 7 Councilmember Yvette Alexander and Commissioners from ANC 7F in attendance at the meeting. Our Ward 7 colleagues will also have an opportunity to weigh in on Reservation 13 since it is now in their ward, and I’m looking forward to working with them.

This entry was posted on Thursday, April 25th, 2013 at 4:05 pm and is filed under 19th Street SE, Development, Reservation 13/Hill East Waterfront. You can follow any responses to this entry through the RSS 2.0 feed. You can leave a response, or trackback from your own site.