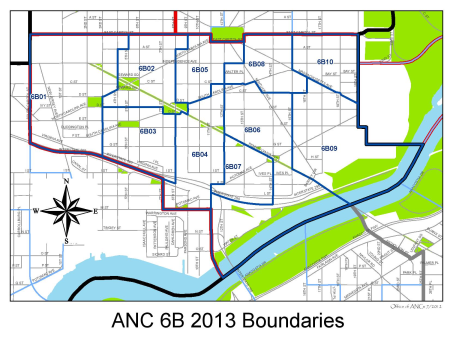 Three of the four new commissioners represent Single Member Districts (SMDs) located fully or partially in Hill East. And Commissioner Francis Campbell (6B10), beginning his sixth term, is now the longest serving commissioner on ANC 6B.

Redistricting also has changed the eastern boundaries of ANC 6B. Since the DC Jail is no longer in Ward 6, ANC 6B has lost one SMD, 6B11, which encompassed the jail. Same with Reservation 13, which is no longer in SMD 6B10. Both Res. 13 and the DC Jail are now in the new SMD 7F07. 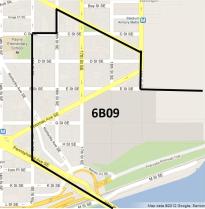 The new boundaries of ANC 6B09

The first full ANC 6B meeting of 2013 is this Tuesday, Jan. 8, 7 pm at the Hill Center (921 Pennsylvania Avenue SE). In addition to the election of officers and approval of the 2013 meeting calendar and commission standing rules, commissioners will be deciding whether to support a new primary and urgent care facility across from Eastern Market and a variance request to allow construction of a three story residential building at the currently vacant 1311 Pennsylvania Avenue SE. View the meeting agenda.