On Jan. 31, the District Department of Transportation held the first of three scheduled public meetings on the Pennsylvania-Potomac Avenue Intersection Pedestrian Safety Study. The primary goal of the study and project is to enhance pedestrian safety at the intersection.   Around 100 attendees had an opportunity to view a presentation on the study and to  ask questions.

Here are the highlights:

Existing conditions at the intersection. You can see the worn pedestrian path in the PA Ave median.

“Traffic square” concept previously shared in 2009. This concept is no longer on the table. 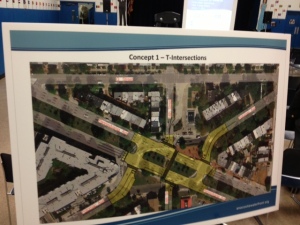 Concept 1 would create T-intersections at Penn and Potomac Aves. and 14th St. SE

Concept 2 would create a traffic oval at the Penn-Potomac intersection.

This entry was posted on Monday, February 4th, 2013 at 12:11 pm and is filed under Barney Circle, Penn East, Potomac Avenue Metro, Transportation. You can follow any responses to this entry through the RSS 2.0 feed. You can leave a response, or trackback from your own site.